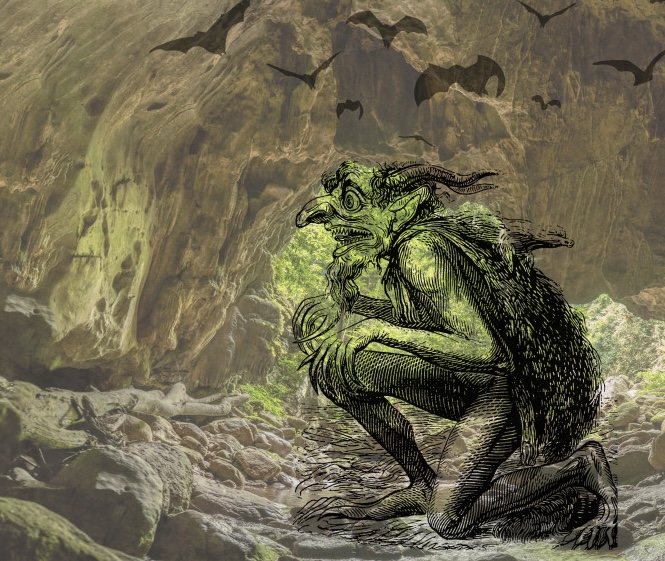 Legends of the Big Hell

Gutmanis Cave is recognised as the oldest tourist attraction in Latvia. Unfortunately, the Big Hell of Liepa, also known as the Devil’s Kiln, has so far remained in the shadow of Gutmanis Cave, which can be proud of its equally ancient, if not even more ancient, tourism traditions, as once evidenced by an ancient 16th-century year scratched into its wall, which was unfortunately destroyed in 1860. It was described in 1864 by pastor Ludwig Hervagen: “In this cave, as if in Turaida Cave, many people have marked their names and the year when they were in the cave. The first inscription was made in about 1500, i.e., about 300 to 400 years ago. Someone around 4 years ago marked the year 1300. But their 300 to 400-year-old inscription was seen by the innkeeper of Liepa 50 years ago, and the old people already then said that the inscription was old. In the summer, many visitors come to see the cave. There are Russian gentlemen and Estonians who come, which shows us that the fame of the cave extends beyond Vidzeme.” Another 19th-century traveller, who spent “more than an hour” looking at the walls of the Hell, found an inscription dated back to as long as the 15th century. These examples prove that the tradition of cave tourism in Latvia is at least half a thousand years old.

The Devil used to live in the Hell. The Devil was supposedly forced out of his abode by the pastors. Nine pastors have failed to do so, having sinned much in their lives. The tenth pastor would almost have kicked the Devil out, but unluckily, he stole an egg once in his life. So, he sinned. The eleventh pastor would have also forced the Devil out, but once in his life he stole a needle. The twelfth pastor was sinless, and he was able to force the Devil out of the cave. The Devil rushed across the Gauja to Sietinieze. The Gauja blocked his way, so the Devil picked up stones like turnips and threw them down into the river. A severe thunderstorm broke out and Thunder kicked the Devil, but “the Devil still managed to reach Sietins”.

There is a big cave near Liepasmuiza close to Cesis called the Devil’s Kiln, and devils used to live in that cave. The devils dressed up as humans and came to meet the travellers and bought from them cattle, flax and everything they were taking to the town. The devils paid good money. But as soon as those people came home with the money given by devils, the money turned into coal.

The Devil sat on the side of the road every day and mended the bast shoes with a sledge shaft. When merchants went to the market to sell their cows, the Devil bought them and paid the money. When merchants went home, they found birch leaves in their pockets instead of money. Later, the pious people called 12 pastors to force the Devil out of Big Hell. When the pastors arrived, the Devil got scared and ran to the Little Hell.

In Liepa parish, the Hell was the abode of devils. People have been seen there with the feet of a cock, a cow and a horse. It is said that burlaks used to live there, and dressed up in all sorts of ways, with horns, big ears and other disguises, they scared people not to go there. Burlaks used to live in sheds.

Legends say that an underground passage led from the cave to the castle of a German baron in Cesis. Once, a brave man wanted to see if it was really possible to get to the castle from the cave. The boy was able to enter the cave, but has since disappeared. Later, people found out that he had been scourged in the castle courtyard for so long that he died. Since then, the cave has been nicknamed Big Hell.